After initial announcements at Microsoft Ignite 2017 in Florida – there was much interest in the roadmap of Microsoft Dynamics solutions – Dynamics 365 and Dynamics NAV.  At the Microsoft partner event, Directions EMEA 2017 in Madrid recently, there was opportunity for further clarity and we have to say, excitement at what the future holds.

The event’s tagline was “Dynamics for SMB”, further moving away from the delineation between ERP and CRM.  The event was very much about bringing together the Dynamics solutions in more of a simple to understand and unified platform.

With Dynamics 365 “Tenerife” (code name) for both cloud and on-premise sharing the same code base (the common data model) and user interface with Microsoft Dynamics NAV 2018 it will provide more flexibility and ease for those customers who want to switch from on-premise to cloud. Partners such as Prodware can also ensure that when developing vertical, sector specific extensions to core functionality on this code base for Microsoft Dynamics, it will be easier to take advantage of upgrades.

The common data service also encompasses business applications such as Microsoft Flow, PowerApps, Power BI and Office 365, which means that businesses can seamlessly extend their back office.

Dynamics 365 will feature new and improved apps, including:

What are these improvements?

The user interface (UI) has also received some attention. 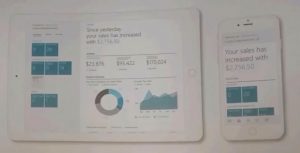 So, in the forthcoming months, Microsoft Dynamics NAV 2018 will be released on 1st December 2017 with a further release Dynamics NAV 2018R2 in Spring 2018, before it comes together under the same umbrella.

This will be in parallel for the Dynamics 365 “Tenerife” releases.  A further 14 localisations for Microsoft Dynamics 365 will be available in Spring 2018.  You will see a move away from the talk of “Business” and “Enterprise” editions when it comes to functionality.